A Double-Double Helping of Brakes

Some things just go well in double servings like two scoops of ice cream instead one or a Double-Double for those who enjoy In-N-Out Burger. But 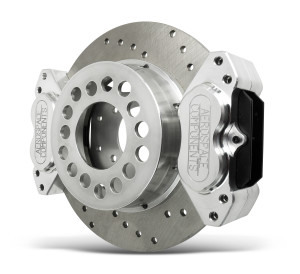 when it comes to braking systems, a double set of calipers tends to be just as good as a double helping of your favorite comfort food. Aerospace Components offers several different dual-caliper braking systems for both dragsters and door cars, which are particularly helpful in both turbocharged combinations and top-end stopping force. All Dual Rear Brake kits are specifically engineered for the double calipers with brackets and hardware; each system comes with the same high quality, Made in the U.S.A. products that Aerospace Components has become known to design and manufacturer.
Adding a Dual Rear Brake kit has several advantages, particularly in rear engine dragsters. One of the benefits of the dual rear brake system is to help slow down heavy racecars without brake fade since the braking force is split between two calipers on each side of the vehicle. That brake fade can and will come into the picture as you get later in the rounds and race officials begin to run the class in a round robin style. In both dragsters and door cars, that type of quick turnaround time doesn’t allow braking 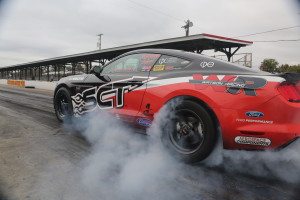 systems to cool off properly and the second set of calipers prevents the hot pad problems. In the case of a dragster, the benefits are obvious because rail cars only feature brakes on the backside. The system can take more abuse because of twice the amount of pads handling the braking.
The term building boost has been a time-honored tradition for serious turbocharged entries. The driver will stand on the brake pedal right before the pre-stage beams or with the top bulb turned on. As the engine works against the load of the brakes, the turbocharger will start to create positive pressure in the intake manifold. The engine torque and horsepower increases as more boost is present, which in turn attempts to turn the rear tires, however the two sets of Aerospace Components rear brake calipers will hold the car to prevent that from happening. With the engine producing boost, the driver will then creep into the stage beam ready for action with the boost at an optimum level to help the car perform at its best.
In some situations, like in the more serious turbo vehicles, once the engine starts to make boost, the driver will ease the car into the lights by slightly/partially releasing the brake pedal pressure while simultaneously grabbing the transbrake button. This “bumps” the car into the staged beams. The technique can be difficult, particularly for drivers that are new in the turbo world. Thanks to some ignition and digital solution manufacturers, there are now specific pulse modulators, affectionately nicknamed a bump box, that have replaced the driver’s manual control of the transbrake in the staging technique. Despite these awesome electronics, the Aerospace Components Dual Rear Brake kits are still a vital and essential component in the staging process for turbocharged applications to hold the vehicle when the engine revs are brought up against the stopping force of the brakes.
We caught up with noted NMRA racer Brad Gusler of BG Racing, who has been pushing the edge of Ford’s latest engineering marvel, the 2.3L EcoBoost engine. His 2015 Mustang EcoBoost recently eclipsed the 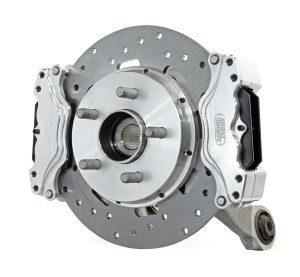 ten-second barrier, the first time for that engine platform. He explained the new Aerospace Components S550 Mustang Dual Rear Brake kit was an integral part of his success partly due to class rules and the fact that the aftermarket hasn’t developed a transbrake yet for the factory Ford 6R80 transmission. Gusler relies on his braking system to achieve the proper launching technique for the best performance and consistency when competing in the Index-based Super Stang category.
“It has been a night and day difference from the single caliper to the dual caliper,” commented Gusler as he reminisced about the recent switch to the Aerospace Components kit. Before the dual rear calipers, his 2015 Mustang EcoBoost would push through the lights anywhere from three to five pounds of boost. And according to Gusler, his starting line technique was very inconsistent. Once the new dual caliper setup was installed—“I can hold the car at 4,000 rpm and the engine is at 20 pounds of boost every time. That is a big reason how I can get the car to run 1.45 sixty-foot times,” he concluded. The sixty-foot time is impressive considering the car’s 3,600-pound race weight and IRS style rear suspension.
Staging a turbocharged application and dragster/fast door car aren’t the only usefulness for the dual rear caliper kits. It is also a great tool in footbrake style bracket racing categories where a transbrake is illegal and the extra set of rear calipers makes a big difference when staging and leaving the starting line under the green light. For some applications, the greater clamping force allows a higher launch rpm, which will create a quicker reacting vehicle, as the engine will be closer to peak torque than if the engine was at a lower rpm, letting the torque converter flash too.
As for the Aerospace Components kit itself, the parts and pieces are all made in the U.S.A. with the same high quality reputation that the company was built upon. It all starts with the 11-3/8 inch diameter, 5/16-inch thick rotors that are drilled to help save weight and dissipate expanding gases. The calipers feature multiple mounting holes to accommodate several different five-lug patterns—4.5-inch, 4.75-inch, or 5-inch. There are also provisions for either ½-inch or 5/8-inch wheel studs. Aerospace Components engineers then turned to its in-house CNC machining capabilities to manufacturer the calipers, brake hats, and mounting brackets. All of it is made from 6061-T6 billet aluminum, ensuring quality, strength, and durability. The Dual Rear Brake kits include either a four piston or two piston floating billet caliper setup, depending on the application.
Hawk brake pads are standard just like all the other brake kits from Aerospace Components. Grade 8 hardware is also paramount to the strength and durability of the brake kits and a standard feature. All Dual Rear Brake kits meet and exceed NHRA/IHRA requirements. Aerospace Components keeps the overall weight down to ensure the lightest possible rotating weight for better performance but high quality materials, manufacturing, and design to ensure the optimum braking. For example, the new S550 Mustang Dual Rear Brake kit tips the scales at a scant 31 pounds, allowing you to have a few extra Double-Doubles at In-N-Out Burger and not worry about adding weight to your Mustang. Or you can skip the extra burgers and reduce the weight of your racecar. Aerospace Components notes that the S550 Mustang kits require rear wheels that have a minimum of 14.125-inch inside diameter in order to clear the twin caliper setup. Most other dual rear brake applications will fit with an inside wheel barrel diameter of 13.15-inches.
Holding the vehicle on the starting line or slowing it down the other end, a second helping of brake calipers can help your racecar perform better on track in order to go faster, run quicker, and be more consistent in your quest for lower elapsed times and/or the win light.

DUAL-02 The Aerospace Components Dual Rear Brake kits are available in several different configurations for a variety of applications. The multiple holes in the rotor offer three different types of lug patterns and two stud sizes.

DUAL-03 The dual calipers fit neatly behind the Race Star wheels on the BG Racing EcoBoost-powered S550 Mustang. The 2015-to-present Mustang is the latest Dual Rear Brake design to be offered by Aerospace Components.

DUAL-05 Here is the chart showing how to run the brake lines and the specific installation notes for Dual Rear Brakes.